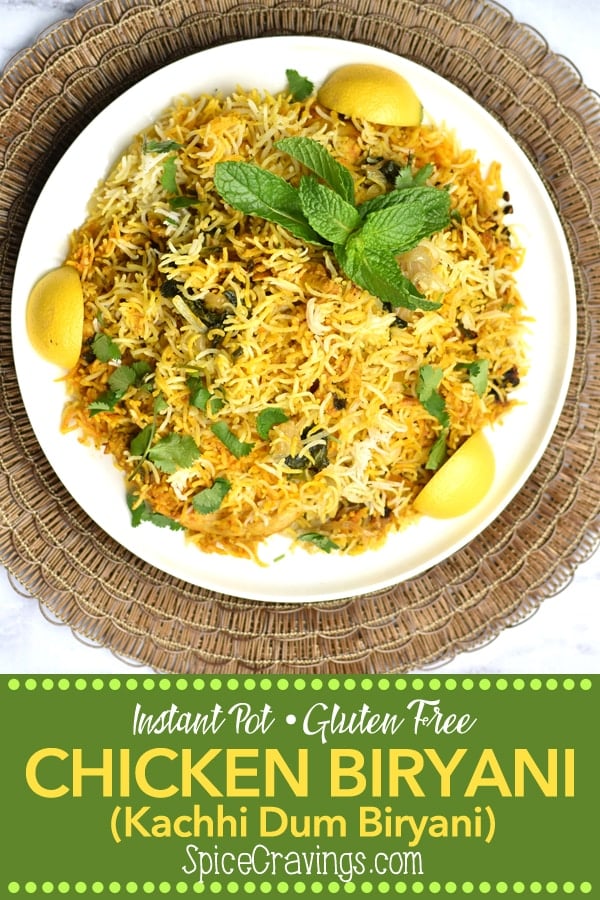 Instant Pot Chicken Biryani is a one-pot Indian chicken and rice dish, in which marinated chicken is steam-cooked with aromatic basmati rice and flavored with herbs, saffron & ground cardamom.

In this simplified and easy Instant Pot Chicken Biryani recipe, I create authentic biryani flavors using my electrical pressure cooker, the Instant Pot.  And it's all done in under an hour, from start to finish!

Traditionally, Chicken Biryani is slow-cooked by steam-cooking basmati rice, with chicken that has been marinated in yogurt and fragrant Indian spices like garam masala.

The process of cooking the meat and rice in steam is called Dum, where the cooking vessel is sealed with wet dough and an airtight environment is created for cooking.

There are many theories about the origin of 'Biryani'.  From what I've read about it, I believe that it originated in Persia and was brought to India by the Mughals.  As per this this theory, Biryani is an Indian adaptation of the Persian Pilaf.

Here's a detailed article on Sukhi's Indian Cuisine, that explains the origin of Biryani and the different Biryani variations throughout India.

There are two basic ways of cooking a Biryani- Kachhi (meaning 'raw') Biryani, in which marinated meat is steam cooked with partially cooked rice.

The rice is 50% cooked when I add it to the biryani pot.   The rice finishes cooking in the juices released by the meat and marinade.  The result is a perfect infusion of flavors.  The rice often turns out multi-colored, depending on what it was closest to in the pot-- the meat, fried onions or saffron.

The other way of making biryani is Pakki (meaning 'cooked') Biryani,  where I prepare a meat curry first, and then cook the rinsed rice in that curry.

I find that between the two, the Kacchi Biryani seems to be the more popular one and is served in restaurants world over.  Traditionally, this is a slow-cooked recipe that takes a couple of hours to make.  I made a 45-minute version of it using my electric pressure cooker- the Instant Pot.

In this Instant Pot Chicken Biryani recipe (see video recipe), I use a non-traditional ingredient, Paprika.  Paprika, adds a smoky-peppery taste and color, which infuses in the meat when the biryani is steam-cooked.  You can use Kashmiri Red Chili Powder instead of paprika if that's what you have on hand.

Occasionally, I also add a teaspoon of Chaat Masala to the biryani masala marinade.  Chaat Masala adds a nice zing to Chicken Biryani, which my family really enjoys.

Here's how I make Chicken Biryani in Instant Pot in about 45 minutes, from start to finish:

✓ Wash and soak rice: I start by soaking basmati rice in water.  Set is aside for 15 minutes, while I do the following prep-work.

✓ Start the onions: If I am making fried onions from scratch, I add them to the Instant Pot, on Saute mode.  They continue to saute and get brown while I prepare the marinade and rice.

✓ Marinate chicken: I marinate chicken by mixing all ingredients listed under "marinade for chicken".  Toss chicken in it and keep aside.

✓ Partially boil rice: Rinse the rice 2-3 times, till water runs clear.  Then, I partially cook the rice in fresh water in the microwave for about 5 minutes, till it's 50% done, and then strain it.

✓ Layer Biryani: Now onto layering biryani in the Instant pot.  Add ½ cup water (for 6 qt). This helps avoid a burn message. Layer the chicken evenly.  I layer the rice on top of that in an even layer.  Add ¼ cup water over rice.

✓ Rest Biryani: Open the lid and using oven mitts, I remove the inner pot from the Instant Pot base, to stop the cooking process. Let it rest for 5 minutes, uncovered.  This allows for any excess moisture to evaporate.

✓ Serve: Carefully fluff up the biryani with a fork, without breaking the rice and enjoy with a cucumber-yogurt dip called Cucumber Raita!

How to Double Chicken Biryani Recipe for a Party

Multiplying this recipe is easy.  To double up this recipe, I create alternate layers of chicken and rice, basically repeating step 3 in the order mentioned.  Add 2-3  tablespoons of water in between each layer of rice.

How to Make Chicken Biryani in a Stovetop Pressure Cooker

Before I got my Instant Pot, I used to cook it in my stove top pressure cooker.  Here's how:

In this recipe, I use a popular Indian spice-blend, called garam masala, for flavoring the chicken, as well as the rice.  You can find garam masala at most grocery stores, but I prefer to make my own garam masala blend.

It takes under 15 minutes to make enough to last me a month, and the end result is so worth the little effort.  If you have the time to make yours at home too, try this easy recipe for Homemade Garam Masala.

I feel that fried onions are a huge contributor of flavor in any Biryani.  I mostly make it them at home, but that takes a bit of time.  When I'm short on time, I use store-bought fried onions from Trader Joe's, and those work great for Biryani.  When I am preparing them at home, I use one of these two ways:

I slice 2 medium onions thinly.  Then, I heat the Instant pot on SAUTE (high), or, a griddle on medium high heat, and add 2-3 tablespoons ghee or oil and add the onions.  I add a pinch of salt to the onions to speed up the process.

It is important to keep stirring every 3-4 minutes till the onions are golden brown, which takes around 12-14 minutes, depending on the size of the cooking pot.  The wider the surface area, the quicker they brown.

In the Oven (my preferred way)

Alternatively, I toss thinly sliced onions with melted ghee or oil.  Pre-heat the oven to 425°F and cook the onions for about 20 minutes, till they are golden brown.

This is a nice hands-off way of making fried onions.  I typically make mine using this method, and while the onions are cooking, I do the prep-work for Biryani.

What to Serve with Chicken Biryani

I like to serve Chicken biryani warm, with a Cucumber Raita (cucumber-yogurt dip) and a garden salad, drizzled with fresh lime vinaigrette. 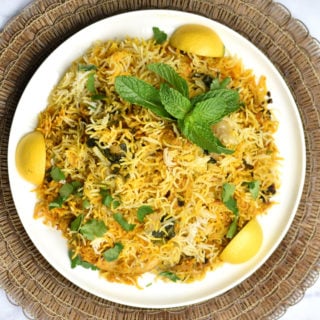 FRIED ONIONS(If making your own)

A foodie by birth and the mind, body and soul behind Spice Cravings. I launched the blog to share my family's favorite easy recipes and equip my kids with an essential life skill- Cooking! A recipe doesn't make it on the blog unless it gets a thumbs-up from my taster-in-chief and teen-chefs, my husband and twin girls! I am also the author of the amazon hot favorite cookbook- "Electric Pressure Cooker Curry Cookbook".
Previous Post: « Sweet 'n' Spicy Lemon Pickle in Instant Pot | Nimbu ka Achaar
Next Post: Almond Spice Cookies | Indian Nankhatai » 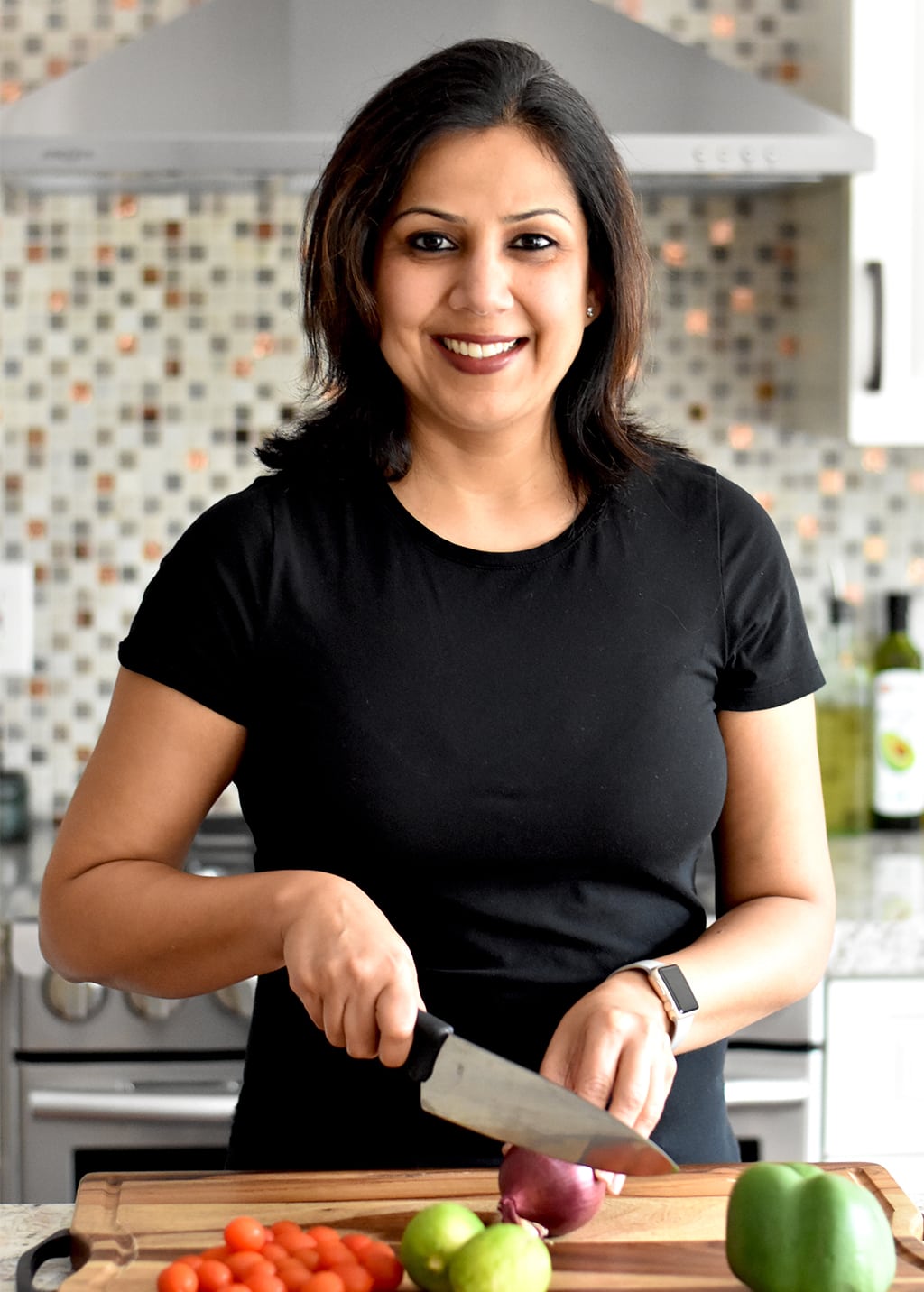 Hi, I'm Aneesha, and I make quick and healthy global recipes that are low in effort and big on taste. With step-by-step photos and video, these recipes are easy to make for my teen kids too. My food is inspired by my love for spices, my North-Indian Punjabi roots, world travels, and life as a working mom!   Read more 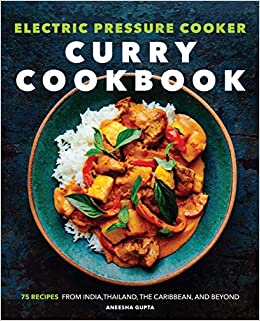 Get my Free eBook with 10 Indian Curry Recipes 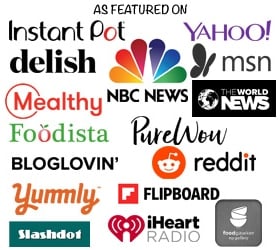