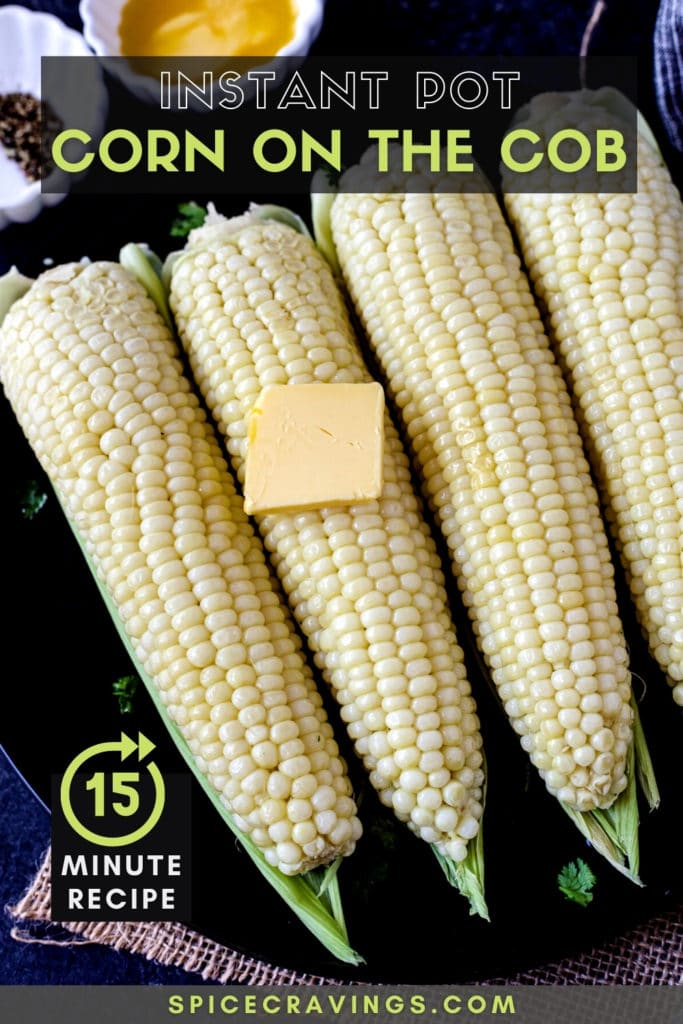 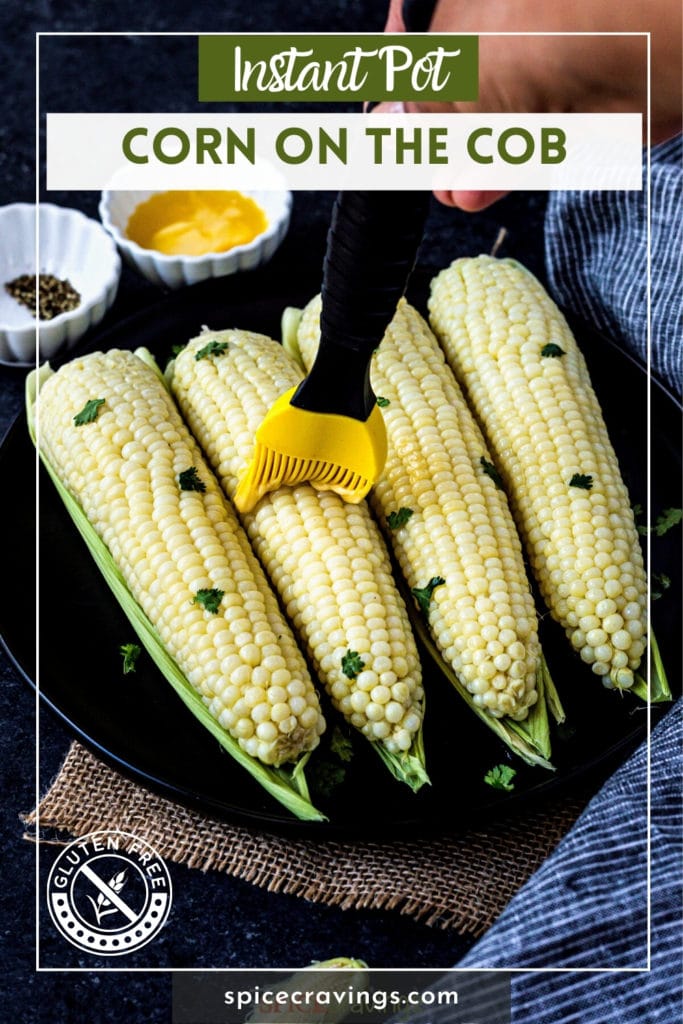 A fail-proof recipe for Instant Pot Corn on the Cob, that's ready in a little over 10 minutes. Enjoy tender, juicy, and perfectly cooked corn as a snack, appetizer or as a side dish with your favorite entree.

Whether you cook 2 or more, this recipe makes cooking corn simple and quick. And by steaming, the corn ends up preserving more nutrients than boiling!

My family loves corn in any shape or form. It is great as it is, and also makes for a wonderful addition to salads, side dishes and sweet corn soup. But for us nothing beats the satisfaction of a perfectly cooked corn on the cob smeared with softened butter!

This Instant Pot corn on the cob recipe is a true game-changer. This method uses the pressure cooker to steam the corn rather than boil it. Not only is it more convenient than having to babysit a pot of boiling water, but it also preserves more nutrients in the corn.

If you are new to Instant Pot cooking, do checkout the quick set-up guide or easy beginner recipes for your Instant Pot.

You really just need corn and water for this recipe. After that, the choice is yours. You can enjoy it plain or season it with whatever blend of spices you like!

Seasoning Ideas for Corn on the Cob

Here are a few ways to kick the flavor of your corn on the cob up a notch!

How to Make Instant Pot Corn on the Cob

This instant pot corn on the cob is ready in a total of 14 minutes! Here are the step by step instructions:

Cooking corn ears 'with husk': If you want to cook the corn with the husk, simply trim off the stem and stack them as per instructions. Pressure cook for 3 minutes. When cooled, grab firmly at the top by it's silk and squeeze, and the ear of corn will slide out!

Alternate Methods for Making Corn on the Cob

No instant pot? There are plenty of ways you can cook corn on the cob!

Air Fryer Corn on the Cob:

Stovetop Corn on the Cob:

Oven-Roasted Corn on the Cob:

Grilled Corn on the Cob:

How to Serve Corn on the Cob

Corn on the cob makes an excellent side dish next to chicken burgers, veggie burgers, chicken sandwiches, fish tacos, chicken fajitas, you name it. Since you have so many seasoning options, you can really design the corn on the cob to fit whatever recipe you're serving it with!

You can also remove the corn kernels from the cob using a knife and use them as part of another recipe entirely. Try them in my sweet corn soup, corn chowder, or Mexican quinoa!

Cooked corn on the cob will last in an airtight container in the fridge for 2-3 days. To reheat the corn, you have a couple of options:

To freeze, remove the corn kernels from the cob using a knife and store those in an airtight container in the freezer for up to 3 months.

Is it better to steam or boil corn on the cob?

I definitely prefer to steam my corn in the cob in the instant pot. Not only is it quicker to cook, but steaming actually helps retain more of the nutritional value of the corn. When you boil corn, a good chunk of the nutrients end up in the water, which you discard.

Where is the best place to keep corn on the cob?

The key to storing corn on the cob is to not let it dry out before you cook it. I recommend storing it in a plastic bag in the fridge and cooking it within 3 days.

Can you freeze corn on the cob?

Yes! If you're not going to use your fresh corn on the cob right away, you should freeze it. To do so, prep it by removing the husks and silks, boil it in water for 3-4 minutes, then blanch it in ice water for 3-4 minutes to cool it. After that, you can pat it dry and store it in the freezer in a ziplock bag for 8-12 months. When you're ready, simply cook it for 4 minutes instead of 2.

Looking for more easy instant pot beginner recipes? Here are a few of my favorites: 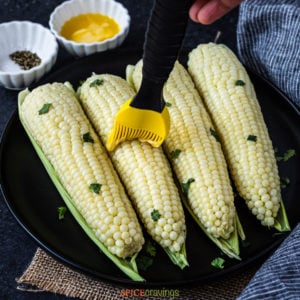 Instant Pot Corn on the Cob

For Instant Pot Corn on the Cob

Prevent your screen from going dark

Note: The nutrition facts below are my estimates and do not include seasoning. If you are following any diet plan, I recommend cross-checking with your preferred nutrition calculator.