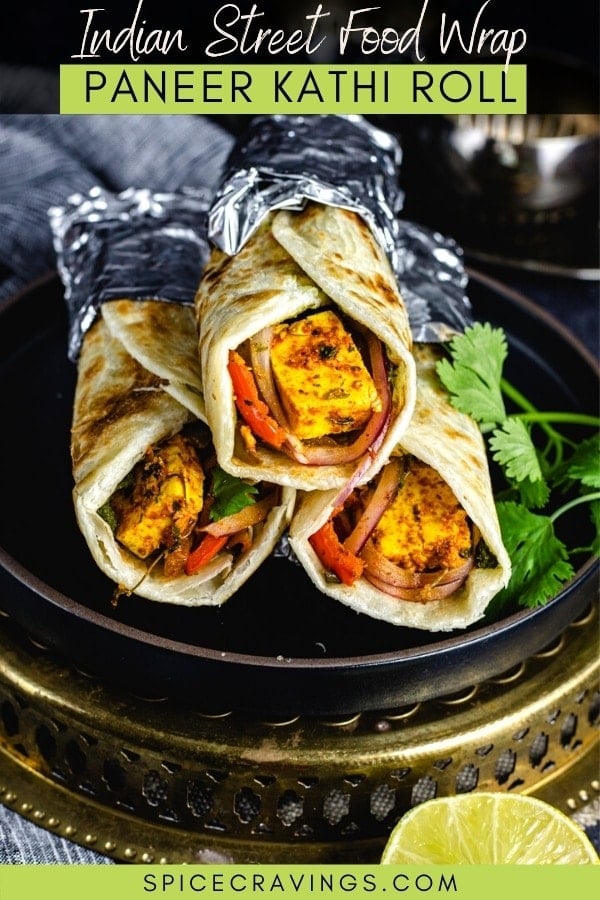 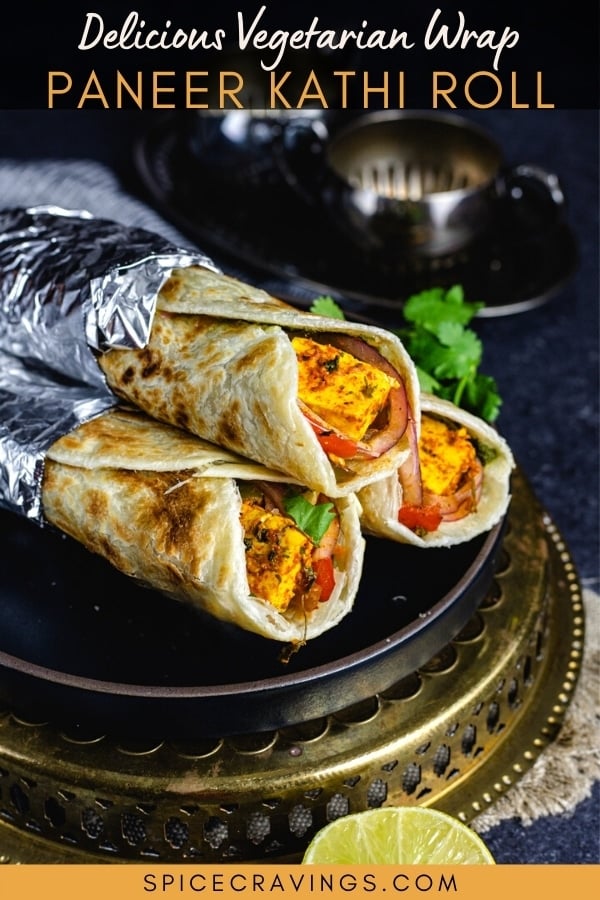 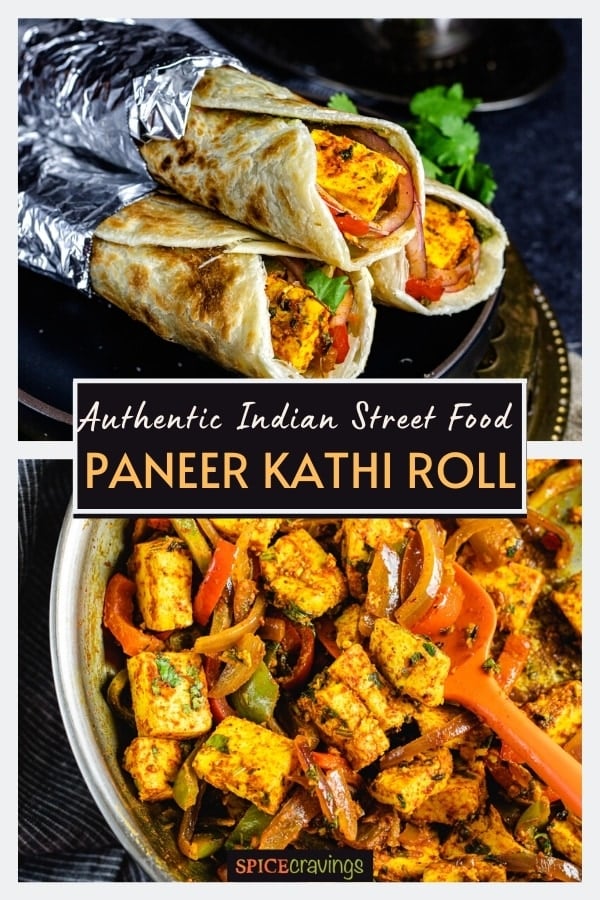 This Paneer Kathi Roll or Paneer Frankie is a delicious vegetarian Indian street food wrap. In this 30-minute recipe, paneer (Indian cottage cheese) marinated in yogurt and aromatic spices is cooked with vegetables, then stuffed inside a crisp paratha or tortilla, for a roll that will please vegetarians and meat-eaters alike!

I love making kathi rolls, especially when I'm hosting a large crowd. They're so easy to serve and eat. Since half of my friends prefer vegetarian food, I adapted my Chicken Kathi Roll recipe to make a vegetarian roll, and Paneer was the obvious choice!

This recipe is inspired by Nizam's Kathi Kebab in CP (Connaught Place, New Delhi), a restaurant I remember fondly from when I was growing up in India. This version captures the same marinated, creamy-spicy flavors in a buttery paratha, but the chicken has been swapped out for cheesy paneer.

These paneer rolls are perfect for an easy weeknight dinner, or for making a stack of them along with the chicken version for a party or potluck. Be ready with the recipe though, your guests will surely ask for it before they leave!

Fun Fact: Paneer was first introduced to North India in the 16th century by Persian and Afghan rules. The word "paneer" comes from the word "peynir," which translates to cheese.

What Is Paneer Kathi Roll?

A kathi or kati roll originates from a popular restaurant called Nizam's, in Kolkata, West Bengal, India. It gets its name from a "kati", or the skewer used to cook the kebab meat traditionally found inside the roll. The fillings were traditionally grilled red meat and vegetables, stuffed inside paratha (Indian flatbread). Kathi rolls are popular street foods in Delhi, Kolkata and Mumbai.

What is a Frankie? Who Invented it?

Paneer Frankie is another popular vegetable and cheese stuffed wrap that is unique to Mumbai. The credit for inventing Bombay Frankie goes to Amarjit Singh Tibb, a national-level hockey player and pharmacist, who took inspiration from a Lebanese pita wrap and created this iconic roll in 1969.

This Paneer Kathi Roll, or Paneer Frankie, combines the juicy flavors of the Frankie with the crisp flavors of a traditional kathi roll.

If you are a fan of making Indian food at home, you probably already have most of the ingredients for your Paneer Frankie!

For the Marinade and Paneer:

For the Kathi Roll:

What is Paneer Kathi Roll?

Paneer Kathi Rolls are a popular Indian street food made with Indian flatbread called paratha, then stuffed with paneer (cheese) that has been marinated in yogurt and spices, as well as onions and peppers.

What is in a Kati Roll?

Kathi or kati rolls are typically filled with various meats or paneer, vegetables such as pepper and onions, and chutney. They are then rolled in crisp paratha.

How many calories are in Paneer Kathi Roll?

For this particular roll, there are about 287 calories per roll when using a tortilla. Check out the recipe card for more in-depth nutritional information.

Kathi rolls were first created at Nizam's in Kolkata, India.

While many kathi or kati rolls are not vegan, this one can easily be made vegan by using tofu and other substitutions. (see Recipe notes above)

What is Paneer Frankie?

Frankies and kathi rolls are both street foods popular in India. While they are similar, there are some differences. A kathi roll is from Kolkata, while a frankie is from Mumbai and sometimes called a Bombay Frankie.

More Paneer Recipes From My Kitchen 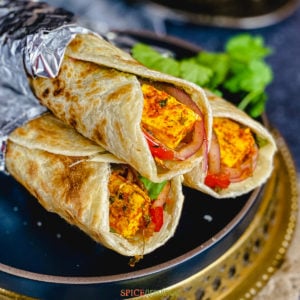 Prevent your screen from going dark

Note: The nutrition facts below are my estimates based on a serving of 2 flour tortilla rolls per person and do not include egg. If you are following any diet plan, I recommend cross-checking with your preferred nutrition calculator.