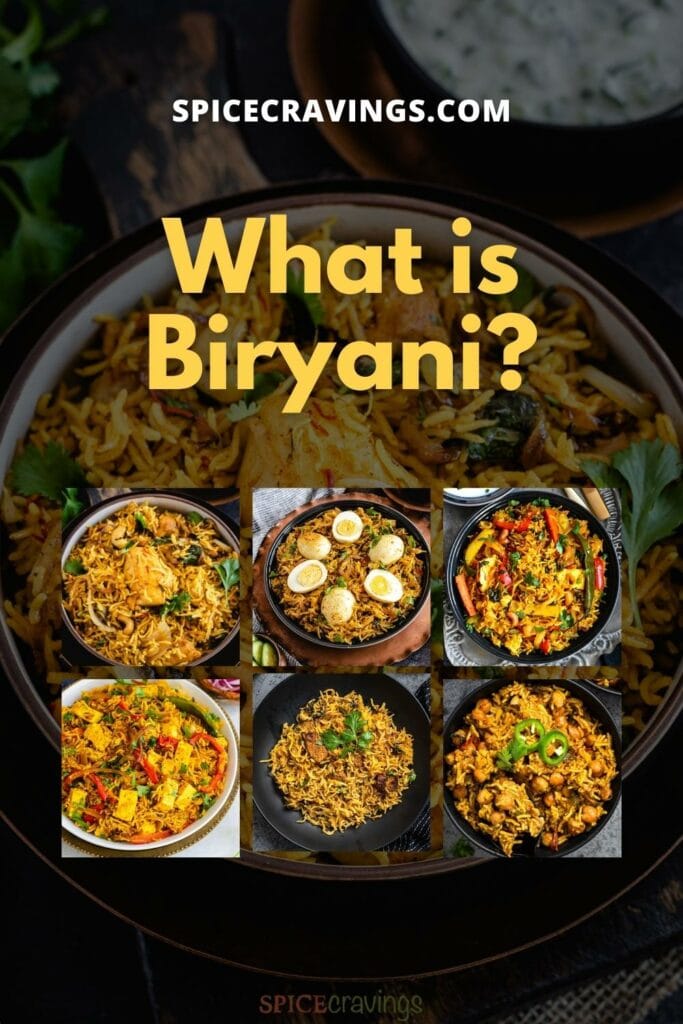 Here is a comprehensive guide on Biryani, the most popular rice dish from the Indian subcontinent. Learn about the components, the best rice to use, and the multiple cooking methods, whether it be chicken, lamb, vegetable, or paneer.

Biryani is a staple meal in many homes for special occasions and holidays. It's the epitome of Indian comfort food, one that elevates humble ingredients into a showstopping dish that's a favorite across the Indian subcontinent.

With countless regional variations, what I love most about biryani is that it is a blank canvas of sorts, allowing you to pick your protein choice or keep it vegetarian.

Come learn about the origin and process of making this popular layered rice dish. With a little bit of know-how and the right set of ingredients, this dish can become a staple in your home too.

Biryani (pronounced 'beer-ya-nee'), in its most fundamental form, is a layered rice dish made with Indian spices, rice, fresh herbs, and usually some type of protein, such as meat, cheese, or egg.

It is traditionally assembled in a clay pot, sealed with dough, and cooked for hours over a low flame.

The word Biryani comes from the Persian word birian, meaning "fried before cooking."

Historically speaking, it is believed that biryani originated from Persia and was brought to India either by the Mughals, or pilgrims and traders. This dish evolved as it traveled through different regions.

The original biryani recipes always include meat, but the modern variations include vegetables, paneer, and other sources of protein.

Biryani is known for its aroma and flavor. Fresh herbs, saffron, and basmati rice give it a sweet-floral aroma that hits the nose before you taste it.

Rice: long grain aromatic white rice, such as basmati, is the most popular. But there are additional options, which we touch on below.

Meat: regional variations exist based on the protein source that is easily available. Shrimp and seafood are more common in coastal regions, whereas meat (chicken, lamb, mutton, goat, beef) is used in the inland regions.

Marinade: a yogurt-spiced marinade is a classic approach, as the yogurt helps tenderize the meat prior to cooking. That being said, variations exist among regions.

Spices: spices are added during the cooking process to add as much flavor as possible. The spices can be whole or ground, and vary with each version. Commonly used spiced include cumin, coriander, and garam masala.

Aromatics: this includes soaked saffron, fresh herbs, whole spices, fresh ginger, and garlic. This further adds to the depth of the dish.

Fried Onions: caramelized onions are usually added on top of the rice before steam cooking, along with nuts and herbs.

Basmati rice is the go-to grain for most biryani recipes. Kohinoor XL is my preferred brand for this dish.

That being said, some cooks like to use alternative aromatic rice varieties, such as, jeerakasala, or seeraga samba.

Just as there are many variations of the dish, there are also many different cooking methods. The three most popular include:

Dum Biryani: Parboiled rice and raw marinated meat are placed into a pot, sealed and cooked over low heat for hours.

Kachhi Biryani: Raw rice and raw marinated meat are cooked together and sealed in the same pot, trapping the steam, and cooked for hours (similar to dum style).

Pakki Biryani: Rice and meat are first cooked separately, then combined and steamed for a shorter amount of time.

Even though the variations are endless, here are some of the popular ones. Each of the following types gets its name from the region it was created. These include:

Hyderabadi Biryani: Spicy, hearty goat biryani that is marinated, cooked along with the rice, and flavored with saffron and coconut.

Lucknowi Biryani: Following a Persian cooking style, the meat and gravy are cooked partially, then layered with rice and served in a copper handi.

Calcutta / Kolkata Biryani: Prepared with potatoes and eggs (and sometimes meat), very lightly spiced and the rice is flavored with a touch of rose water.

Malabar Biryani: Uses only khaima / jeerakasala rice mixed with ghee and is a popular dish mastered by the Malabar Muslim community.

Ambur Biryani: Meat and rice are cooked separately, then combined and flavored with mint and curd.

If you are wondering what is chicken biryani, or about other homemade biryani recipes, the following are my most popular recipes on the blog:

Check out the full collection of Popular Biryani Recipes on the blog.

Raita (Indian yogurt sauce) and salad are the popular condiments often paired with biryani. Here are some of my favorite picks:

What is biryani rice?

Basmati rice is the default biryani rice for most recipes in Northern India.

Is biryani from India or Pakistan?

Many people agree biryani origins began in Persia as a humble meat-and-rice dish, then traveled to South India and its roots were born. The many variations are based on the region they were created.

Is biryani a curry?

Even though biryani tastes like rice mixed with curry, it's not a curry. Biryani is a dish in which marinated meat, spices, and gravy are cooked and layered together with a much higher ratio of rice. It is more comparable to a pilaf.

What is biryani called in English?

Biryani comes from the Persian word birian, meaning "fried" or "roasted" before cooking.

How do you explain biryani?

In the simplest terms, biryani is a mixed rice dish paired with some source of protein (seafood, meat, egg, paneer, vegetables), spices, and aromatics, that's cooked over a low flame.

What is the difference between biryani and rice?

Biryani is a rice dish that is cooked in layers. This could mean the rice and meat are cooked separately or together with a wide variety of spices, then finished with fried onions.