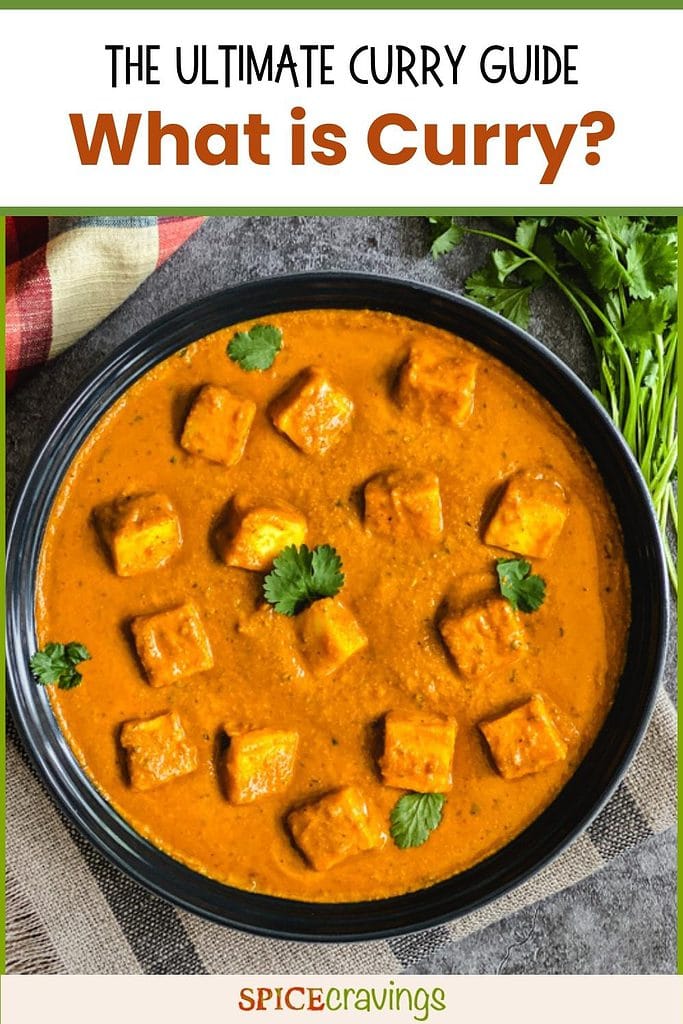 Here is a comprehensive guide to what is curry, including its origin, popular types of curry, along with differences between curry powder, paste, and leaves. Learn about the global and regional influences that have transformed curry into what it is today.

Curry has been around for millennia. It is a flavorful, heavily spiced, iconic dish that has shaped the cuisine of many regions around the world. It can feature chicken, goat, salmon, vegetables, paneer and so much more.

Thousands of variations exist based on climate, terrain, availability of ingredients, and cultural and religious influences.

Because of its diverse (and sometimes complicated) history, curry can get lost in translation or misinterpreted. Let's take a deep look at this comforting and cozy dish we have all grown to love!

Curry is a generic term that refers to a dish of either meat or vegetables that has been seasoned with a mix of aromatics, chiles, and ground spices. It can be dry or wet and is usually eaten with rice or flatbread.

The word 'curry' comes from the Tamil (Indian language) word, 'kari', meaning sauce, and refers to meat or vegetable-based stew.

The taste of curry is vast, as it can range from smoky, savory, warming, spicy or earthy. The taste depends on many factors, including region or ingredients.

Check out more details on what forms and influences the taste of curry in this article: What does Curry Taste Like?

The origin of curry goes back thousands of years to the Indus Valley Civilization (modern-day eastern Pakistan and northwest India) around 2600 BCE.

Archaeological evidence from Mohenjo-Daro suggests the use of a mortar and pestle used to pound whole spices like cumin, mustard seeds, fennel, and tamarind pods.

In the early 1500s, the Portuguese introduced chilies in the local stews and called them Carel. In the 18th century, the British transformed Carel into Curry.

Trade and British conquests further spread curry into Asia. From there curry evolved with regional and local ingredients, climate, and lifestyles.

What is Curry Powder

Curry powder is a mix of ground spices, all varying in taste, color, and aroma depending on the spices of choice. Most store-bought curry powders include turmeric, which gives it that iconic yellow color.

Contrary to popular belief, curry powder isn't Indian. It was actually developed by the British in the 1800s so that they could replicate the flavor of Indian cuisine at home.

Curry paste is a fresh mix of aromatics, like garlic, ginger or galangal, lemongrass, chiles, and/or herbs, pureed together to make a thick paste.

This thick puree is typically warmed through in hot oil or ghee, then further thinned with a liquid, such as coconut milk or cream.

Curry roux cubes are a concentrated mix of spices and thickeners popular in Japanese cooking. Think of them like spiced bullion cubes.

Once they are mixed with a liquid, their flavors and aromas release, creating balanced, smooth and umami-rich sauces.

Curry leaves are bright-to-dark green, glossy leaves with an aromatic and citrus-like flavor profile. With a balanced bittersweet taste, they can be used both fresh and dry in many recipes.

They are extremely popular in Southern Indian cuisine, where they're used in tempering and added to vegetable and lentil stews and stir-frys.

The world of curry is vast and extensive, and with this comes numerous types of curry from around the world.

While it's not possible to list all the curries, the following are the most popular types of curry, and those you will find on many restaurant menus.

You can also find a curry for almost every region in my cookbook: The Electric Pressure Curry Cookbook

Here are some traditional and popular curries that you might have tasted in a restaurant or at a friend’s home:

Northern Region: This includes India, Pakistan, Nepal, and Bhutan. Much of the influence comes from climate, terrain and the Mughal Empire.

Dominant ingredients and/or the originating region define the names of most Indian curries. For example, Laal Maas, where "laal" refers to the 'red color' from the red chilies, Amritsari Chole, where the place of origin "Amritsar" is mentioned, and Palak Paneer, which is a combination of palak (spinach) and paneer (Indian cheese).

On the other hand, ‘Salan’ and ‘Shorba’ replace the generic term ‘curry’ in Pakistan, the style of cooking is mentioned in the names of dishes, for example, ‘Bhuna' (meaning sauteed) Gosht, and Chicken ‘Korma' (meaning braised).

Bengali: Bengali cuisine is based on the flavors of Bangladesh and West Bengal in India. Many Bengali curries include fresh fish, mustard, and poppy seeds.

What makes southeast Asian curries so distinct is the use of coconut milk, along with spices and chiles. These indicate the color of the curry such as red, yellow, or green.

Check out the distinction between the different Thai curries. You can also find a range of Thai curries in this collection: Asian Recipes

Red: a fresh paste made from whole red chiles, coriander seeds, cumin seeds, black pepper, cayenne, lemongrass, and aromatics like ginger, garlic, and shallot. I love to use it in mango chicken curry.

Yellow: the mildest of the bunch, it is made with a mix of aromatics and dried spices, the primary ingredients being coriander, cumin, and turmeric, much like this coconut fish curry.

Green: the spiciest Thai curry paste is made from fresh green chiles, aromatics, coriander, cumin, and plenty of cilantro and basil to enhance its green color. I use it up in this vegan Thai green curry.

Massaman: a mild Thai red dish with the addition of warming spices such as cardamom, cinnamon, and cloves, with the nutty addition of roasted peanuts. A good example is the Thai Massaman curry.

More Curries Around the World

Here are some key notes about popular curries from around the world:

Japan was first introduced to curry by the British Royal Navy. Since then, it has been adopted and transformed into a dish to work with a variety of vegetables and meat. Some consider the Japanese Curry a national dish.

Most middle-eastern curries are semi-dry, with a small amount of sauce coating the meat. The ingredient list often includes local fruits and nuts, like pomegranate, figs, and walnuts, like in the Persian dish called Fezejan.

North African curries are heavily influenced by the Mediterranean and the Middle East, thanks to their close proximity. They are flavored with warm, sweet spices like cinnamon and saffron, like in Tagine, Morocco's signature dish. Check out this Moroccan-style Chickpea Soup.

The cooking style of many east African curries is very similar to Indian curries. It often includes lentils and vegetables, along with a few meat dishes. Some of the most famous examples would be Ethiopia's Misir Wot (red lentil stew) or Key Wot (beef stew).

British curry is based on Indian recipes, with turmeric and the famous 'curry powder' being the primary ingredient. Many iconic Indian curries are popular in Britain, including chicken tikka masala, and butter chicken.

Curry in the Caribbean islands of the Bahamas, Jamaica, and more includes local ingredients of plantains, beans, cassava, peppers, tomatoes, sweet potatoes, and coconut, with curry powder as the primary spice blend.

Many curries in Latin American cooking feature beans and rice as the main ingredient, and start with Sofrito, a blend of onions, garlic, peppers, and cilantro. A good example would be this Beans and Rice dish.